Grapefruit here!  At this point we’re almost done with the movie, and making some good progress.  Tomorrow we’re filming the big fight scene, and are confident on Bernie’s acting skills to achieve its highest peak in the dramatic lines that are soon to come… (dramatic pause) With the movie almost done Will decided to start working on music, and is using garage band to create some cool tunes.  Editing is in progress, and excitement is quickly growing about finishing the movie.  We’d like to thank Chris Cunniff, for allowing us to use his house this friday.  Cya Guys Later

This crew has a lot of energy. Ara and Wildens have been rearing to go for months now and have shot a lot of scenes already. They were able to work around a big shooting obstacle by recasting a major role at the eleventh hour, but the result has been a huge boost to their film. That boost is in the form of Dave Frizzell—who is one of the most talented actors in the drama club. Their producer, Matt Ferrara, is trying to keep these guys focused on not only getting the shots they need but making sure the shots are well composed. So far, I have been impressed at what I have seen. As far as buzz is concerned, this film has been flying under the radar. If they can pull off some of the bigger fight scenes that they have written I think the buzz will pick up real fast.

Hey everyone, Grapefruit here, just giving you all an update.  So far we have had dramatic cast rearrangement, and now have Dave Frizzell playing Jack, the notorious gang leader.  We have begun filming some scenes,  and have changed the script around. we plan on filming the Mrs.Lerner scene soon, and still have Old John Hinds jamming away on his guitar. We plan on filming the bulk of the movie in the next couple months. 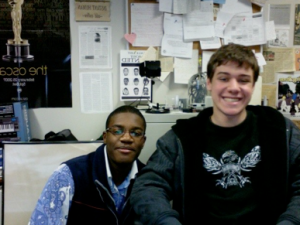 Hey Everyone this is Wildens Petit-Maitre and Ara Nerssessian. We are going to bring Grapefruit back to the top. We have made a lot of progress with the completion of the script, and finding our actors to fill the shoes of our . . . complex characters.  The dorky Geek, played by Wildens, is going after the girl of his dreams, played by Arianna Caci.  Along the way he is faced with the decision of leaving his World-Of-Warcraft-obsessed buddies, such as his brother Eugene played by Bernard Carter, and facing the new challenges of becoming a punk.  So far we have found a producer, Matt Ferrara, and plan on filming as soon as possible.  Will has accepted his role as a geek, even though he at first struggled getting into character.  One of our main actors Jake Cerda is very excited about filming.  Our music producer John Hinds has been jamming some sweet riffs, and is pumped  about the movie!